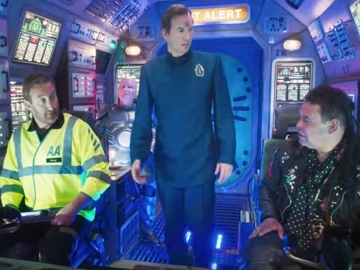 The Red Dwarf boys co-star in a new advert for the AA, which promotes the company’s Smart Breakdown feature available on the AA mobile app.

The 60-second spot, titled “Smart Breakdown,” shows Lister, Cat, Rimmer and Kryten (played by Craig Charles, Danny John-Jules, Chris Barrie and Robert Llewelly) as they get help from the AA patrol again. Lister says he’s got Smart Breakdown with the AA, which sends them your vehicle’s fault data, so the mechanic should know what’s wrong before they even get there.

“So they’ll already know you’re a complete gimboid, then,” Rimmer tells Lister. Shortly after, the mechanic arrives and informs them they have a flat battery due to the fact that something “pretty heavy duty” had been used on the spaceship. Eventually, they find out the cause: it was Cat. “The future of breakdown, today” an onscreen line reads at the end of the ad, which also informs that this feature identifies faults in 80% of engine-related breakdowns.