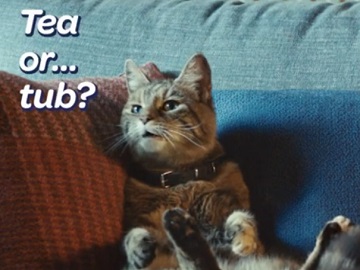 Tea brand Tetley has released a series of new ads featuring its mascots Dave the Dog and Ella the Cat.

The two family pets, first introduced in October 2019 as part of the brand’s new “Now We’re Talking” campaign, co-star in three spots that also aim to make consumers share their preferences on certain topics, such as what they would choose between a warm bath and a nice hot cuppa, if they go milk first or milk last, and how they really like the Tetley tea (strong or milky).

One of the adverts features the furry friends popping the kettle on and relaxing on the sofa over a cup of Tetley tea, on a rainy day, while their family is out. When Ella says she couldn’t sleep the night before, Dave asks her if she tried a nice warm bath. “Ha! Have you ever seen me in a bath?” Ella asks in response. However, Dave’s reply surprises her as he reveals that he has actually seen her. “Thank goodness we’ve got Decaf!” he also adds.

The spot ends with the voiceover saying “Our perfect blends will get anyone talking” and the tagline “Now we’re talking”.

The “Now We’re Talking” campaign, which celebrates the togetherness we feel and the endless opportunities a cuppa and chat provides,” was launched in October 2019.