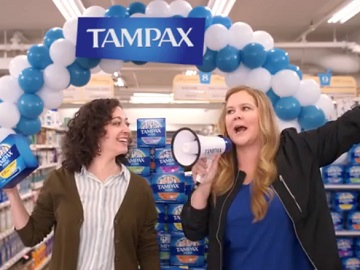 Tampax has enlisted Amy Schumer to star in its latest ad campaign, which aims to put an end to period shame and encourage women to celebrate their periods with pride.

The comedian/actress stars in several videos for the brand, released with the hashtag #TimeToTampax.

In one of them, she is in a grocery store, walking across the personal hygiene aisle and declaring that “we are women, we get periods, and it’s time for us to have no shame in the Tampax game.” At this point, a woman shows up, grabs a box of Tampax out of the pile of boxes placed behind Amy, and shouts her intention of buying it. If initially Amy tries to silent her, saying she doesn’t have to announce it, she then changes her mind and decides to join her in announcing the purchase. “This lady bought a box of Tampax,” she says using a megaphone, specifying that they are celebrating periods over there.

Schumer is also featured in videos that tackle period and tampons miths. In the “Let’s Talk About It” series, she discusses with teenagers about facts regarding periods, tampons, and more.