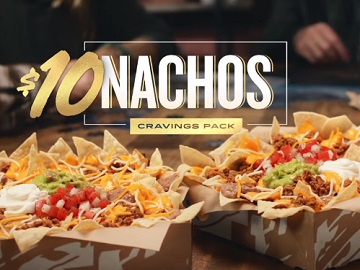 “The only way to beat a box of cheesy, crunchy fully-loaded nachos is… more nachos. It’s Taco Bell’s $10 Nachos Cravings Pack,” the voiceover says on the 15-second spot, urging viewers to order ahead and pick up their order at drive-thru.

Taco Bell, which added, last month, a new Home Taco Bar and a Pineapple Whip Freeze to its menu, is also promoting its $5 Chalupa Cravings Box.