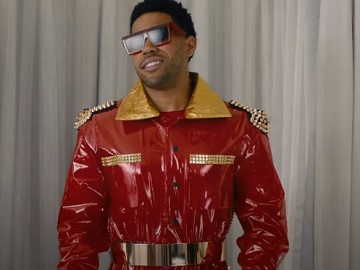 In one of the spots, he tries on several outfits for the red carpet. The first one, consisting of an all-red leather jumpsuit featuring golden metallic accessories, which is thought to be “too Milan” by the fashion stylist, is just not Jake’s type. The second one, a red jacket with lots of black feathers, is not right for him either. So he decides to go with what works, a simple yet elegant red suit, with white shirt and black bowtie.

“Here’s the deal: you gotta go with what works. Like with State Farm,” he tells his stylists, who agree that this is the best option.

The other two commercials feature Jake from State Farm sharing his new idea for a TV show and doing all kinds of greetings with some workers. He says that State Farm are always ready for the unexpected and that at State Farm they get that everyone’s unique, so they have something for everyone.

In a series of recent ads, Jake received all kinds of things from several insurance customers whom he had helped. Serena, a spa owner, tries to offer him ten free minutes in the broth bath and a complimentary wet moss wrap, and Parker, a pizza delivery woman, gives him all kinds of menu items, from pizza to pepperoni pockets, to an atomic brownie and a cider ranch.