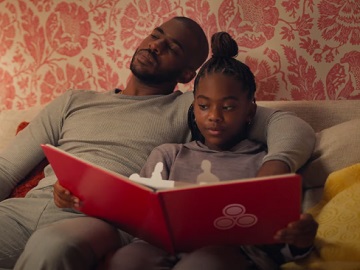 State Farm has released a new ad to highlight that it offers surprisingly great rates.

The spot features Chris Paul’s daughter reading a bedtime story while her dad is almost asleep. However, when she reads the sentence “All the good neighbors got surprisingly great rates with State Farm,” Paul wakes up and asks her to let him see the book. He then sees a character in the book that introduces himself as Jack from State Farm and can’t help asking if “this is a commercial”.

The video ends with Jake from State Farm saying in voiceover the company’s tagline, “Like a good neighbor, State Farm is there”.

State Farm is known for working with NBA All-Star Chris Paul and actor Alfonso Ribeiro for its marketing stunts. Kevin Mimms, who plays Jake, has starred in numerous ads for the insurance provider. In one of them, which also features actor Matthew Bellows as a tech genius who upgraded a car, he impresses a spy by telling her that with the Drive Safe & Save app from State Farm she will save up to 30% for being a safe driver and get a discount for signing up. State Farm has also collaborated with Aaron Rodger, Patrick Mahomes, Taylor Handley, Chris Owen, Reina Hardesty, and more.