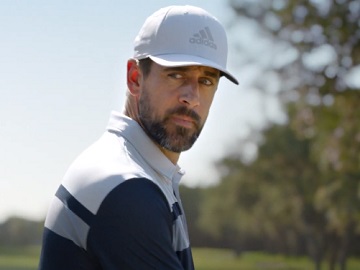 State Farm has released a new ad featuring Jake and Aaron Rodgers. If, in the latest spot, the Green Bay Packers quarterback showed off his arm by throwing his dog’s ball too far, this time he shows off his golf skills.

The commercial opens with Rodgers telling Jake that he appreciates so much the State Farm rates on his insurance he might let him win at golf. Jake answers that State Farm offers great rates for everyone and this proves to be a bad idea for the evolution of his game with Rodgers as the latter gives him no chance to win.

The new campaign features other three commercials featuring Rodgers, Jake the insurance agent, and Patrick Mahomes.
Rodger’s collaboration with State Farm dates back to 2017, when he shared the screen with his dog and his mate Clay Matthews. Mahomes has also starred in other State Farm ads in the past.

In a series of previous ads, Jake (played by Kevin Mimms) received all kinds of things from several insurance customers whom he had helped. Serena, a spa owner, tries to offer him ten free minutes in the broth bath and a complimentary wet moss wrap, and Parker, a pizza deliverywoman, gives him all kinds of menu items, from pizza to pepperoni pockets, to an atomic brownie and a cider ranch.