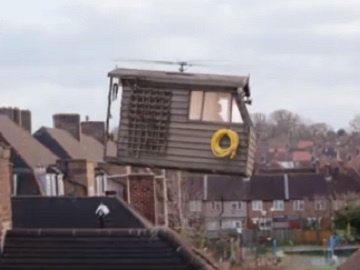 Starling Bank, one of the UK’s leading digital banks, shows a business taking off and up in the air, flying, in its advert, that carries the tagline “Helping Business Fly”.

The 60-second spot opens with a mother in her small shed putting a seat belt on, pushing buttons and then literally taking off, not before waving goodbye, though, to her husband and daughter. Her journey up in the air, where she faces a storm (with help from the Starling Bank) and reaches above the clouds, is a metaphor for the highs and lows of starting a new business.

Starling Bank says it helps your business fly, with no monthly fees to weigh you down, 24/7 in-app support and flexible overdrafts of up to £150k.

Serving as soundtrack is the theme tune from “Robin Hood: Prince of Thieves”, re-recorded with a full orchestra.
The campaign, aimed at growing the bank’s business banking customer base, targeting small and medium-sized enterprises (SMEs), marks the first work from the brand’s new agency line-up of Wonderhood Studios and media agency Bountiful Cow.

Starling Bank revealed that the creative concept was brought to life with both live action as well as through miniatures and practical effects to give it a hand-crafted authentic feel.

The campaign launched on TV earlier this year, on February 23rd, during half-time of the Six Nations England vs Ireland rugby match. The spot aired in commercial breaks during Homeland on C4, ITV’s new drama series Flesh and Blood and Sky One’s new series Intelligence.