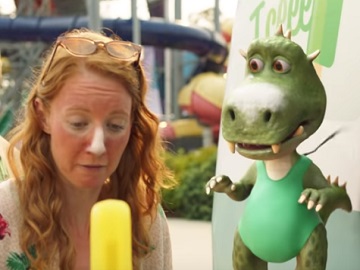 Apple Pay launched for St. George, BankSA and Bank of Melbourne customers in December 2019, while the last of the big four banks in Australia, Westpac, has promised to deliver the contactless payments platform to customers by June 2020.

The spot features the bank’s mascot, Little Dragon, appearing in an amusement park, next to a sunburnt woman, whose
passion fruit popsicle is rapidly melting. Aware that she needs to pay fast, the lady learns from the Little Dragon that StGeorge now have Apple Pay, which is “fast, easy, and seriously awesome.” She then uses her Apple Watch to pay for the icecream so that she could enjoy it before melting completely, but her green friend eats half of it before she realizes.

The commercial ends with the voiceover announcing that St. George now has Apple Pay.

This is not the first time Little Dragon appears on screen. In a previous ad for the financial institution, which debuted earlier this month, on March 6, and promotes its new online home loan application tool, the mascot appears alongside a first-time home buyer overwhelmed by the amount of paperwork she’s facing for her home loan application.