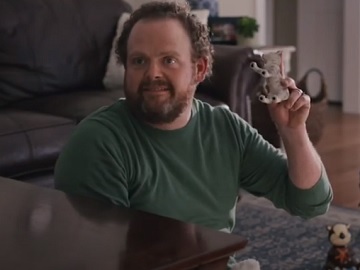 Spectrum has released two new ads to tout its Sports Pack, which provides over ten sports channels for $5 month.

One of the spots features a father who’s playing with his daughter’s toys and various other objects from around the house to pretend he’s the coach of a football team. When the girl shows up and asks her her stuffed lamb to join her at a tea party, the man says that lambie is the tight end and tries to convince her that Muffin, a little toy cat, would be a great guest at her party because he loves tea and has hands of stone. However, the kid doesn’t seem ready to give up so easy.

The commercial ends with the onscreen lines “Football is back. And not a moment too soon” and with the voiceover urging viewers to get Spectrum’s TV Sports Pack for just $5/month, mentioning that they will get NFL Redzone and over ten sports channels.

The other spot celebrates the return of baseball with a middle-aged man running up and down the house shouting “It’s back!”.