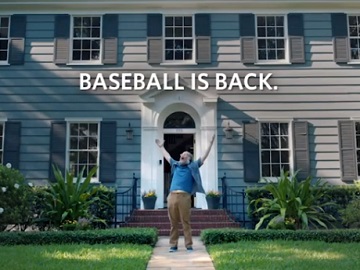 Spectrum promotes its Spectrum Sports Pack, which offers over ten sports channels and NFL Redzone for just $5/month, in a series of new ads.

One of them features a middle-aged man who’s running up and down the house shouting “It’s back!”. Eventually, he gets out in front of the house, shouting out loud the same words, until he suddenly stops because he realizes no one’s hearing him.

“Baseball is back. And not a moment too soon” onscreen lines read at the end of the commercial, which informs that with Spectrum’s TV Sports Pack you get all the sports you want and over ten sports channels for $5/month.

Another spot, which highlights that football is coming back, features a father who’s playing with his daughter’s toys and refuses to return her a toy lamb when she says she needs it for a tea party.