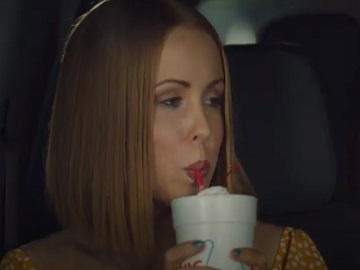 Sonic Drive-In highlights, in its latest commercial, that you can order millions of things from them.

The 30-second ad features a diverse cast of Sonic customers enjoying in their car various menu items, from ice cream, which is used by one man “for medicinal purposes” as it puts him in a good mood, hot-dogs, crispy chicken, crunchy bacon, crispy tender sandwiches, cheeseburgers, onion rings, and desert, which is praised by multiple customers.

“More than a million things to order. Literally.” onscreen lines read at the end of the video, which also sees the tagline “This Is How We Sonic” flashing across the screen.

The fast-food chain is known for its partnership with the NYC-based former “The Colbert Report” writer Peter Grosz and the Chicago-based improve comedian T.J. Jagodowski, who co-star in numerous commercials as the Two Guys. In March 2018, they were joined by Netflix’s “Unbreakable Kimmy Schimdt” stars Jane Krakowski and Ellie Kemper, who are also featured in several commercials for the chain, touting menu items like the $3.99 Crispy Tender Dinner, Sonic Signature Slingers and Cookie Jar Shakes.