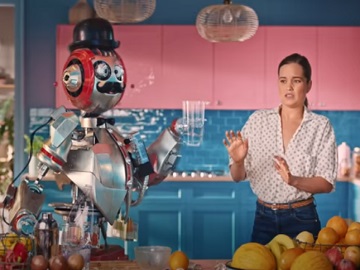 SodaStream continues its campaign in Canada with a new installment.

The spot, titled “A Fresher Way to Refresh,” features an autonomous robot bartender that makes drinks on demand, that actually wreaks havoc in the kitchen, presented as a unique gift one can give to their dear ones. Actually, there’s a fresher way, the voiceover says while the SodaStream girl – actress and singer Sarah Catherine Hook – uses the SodaStream, which is introduced as the perfect gift which makes sparkling water on demand.

Last year, Sarah Catherine Hook starred in a commercial dubbed “Time For A Change,” which took a jab at Coca Cola’s iconic 1971 commercial “Hilltop” and highlighted that “It’s time for a change”. She and the Icelandic professional strongman and actor Hafthor “The Mountain” Bjornsson appeared, alongside several other people, standing on an iceberg-sized heap of discarded plastic bottles, each with a plastic bottle of water (of the “Liter” brand) in their hands, singing about saving the world. Sir Rod Stewart gave voice to a sea turtle that also sang, raising the question “How many bottles would it take before we face the cost?”.

Over the years, the Israel-based manufacturing company has enlisted several celebrities to star in its advertising campaigns. Among them are Scarlett Johansson, who quit her ambassador role with Oxfam after the charity criticized her for appearing in a SodaStream commercial, Mayim Bialik of “The Big Bang Theory”, Kristian Nairn of “Game of Thrones”, and Bill Nye, who starred in the brand’s 2020 Super Bowl commercial.

Earlier this year, SodaStream partnered with Snoop Dogg for its latest campaign, which aims to remind us that “the small things are the most meaningful”. The Gin and Juice rapper gave a statement, as well, declaring that he loves his SodaStream so it was natural for him to partner with the brand for this campaign. “They make a great product and a big difference in the word. I am happy to help spread the love,” he added.

SodaStream is available for purchase at several retailers, including Bed Bath & Beyond, Target, Staples, Williams Sonoma and Amazon.