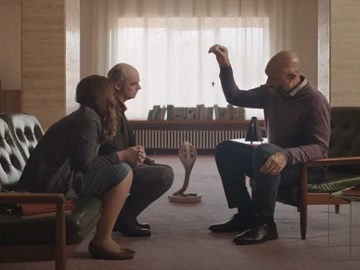 Setapp, a subscription service providing access to 190+ creative, productivity and maintenance apps for Macs, iPhones and iPads, has launched, in partnership with Droga5 London, an ad campaign titled “Don’t Get Sidetracked. Get Setapp,” which aims to highlight that Setapp helps its users complete any task.

One of the spots included in the campaign features a man with a phobia of snakes being hypnotized by his therapist into thinking he has become one. However, when the specialist answers a phone call and gets distracted, he is left in a snake-like state. The video shows the man acting like a snake in a variety of everyday situations and not only. Common actions like going to work, having dinner with family and crossing the street are juxtaposed with less common ones, such as trying to save himself from a car crush.

“We’ve all been there. Got a task to do and then you get distracted. That’s why you need Setapp,” the company’s spokesman says at the end of the commercial, informing that you get access to a curated selection of apps for one monthly subscription, “so you can stay in your flow and always finish what you start”.

The other two ads feature a father who starts a game of hide and seek with his son and leaves him behind a curtain to grow old and a magician who makes a man disappear but fails to bring him back.