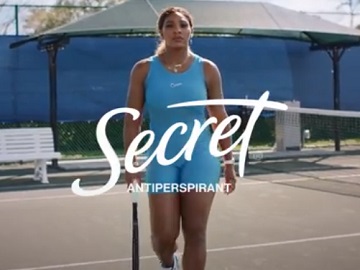 The spot features the tennis player using Secret Clinical Strength, which is – according to the brand – 3 times more than ordinary antiperspirants, while in the background the song “No Sweat” performed by Jessie Reyez is playing.

Williams has thus joined a roster of celebrities featured in the brand’s “All Strength No Sweat” campaign, alongside other celebrities including Jessie Reyez, Camila Mendes, and Swin Cash.

Secret, which is the first antiperspirant brand designed specifically for women, has proudly supported through the years women’s advancement by portraying confident, modern women in its campaigns and communications.

Secret celebrates “strong, sophisticated” women who embody courage and hustle in its ads, which feature an original song, titled “All Strength, No Sweat”.