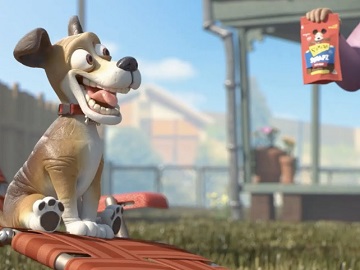 The animated spot, from London agency adam&eveDDB, features Dorothy and Roger, her dog, who jumps up high in the air and into the galaxy for Schmackos.

This is not the first time Schmackos uses the iconic “Dogs Go Wacko for Schmackos” jingle, which it’s the one that actually helped the Mars Petcare brand become Australia’s number one dog treat. In 2017, after a two-year hiatus, a spot from DDB Melbourne brought it back.

Dorothy and her pet, a Jack Russell, returned this year on Australia’s TV screen after an eight-year hiatus. The advertising agency enlisted, for the campaign, Deidre Rubenstein, the actress who originally voiced Dorothy.
The spot has been animated by Not To Scale, the studio behind I Lost My Body, which was nominated for a best-animated feature film Oscar at this year’s Academy Awards.

The campaign, set to run through 2020 and beyond, also includes digital, social, radio and retail media.