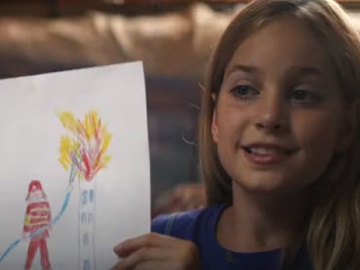 Samsung has released a new commercial to showcase it Rugged Range, which is carefully crafted to do the hard work required by the most demanding jobs.

The spot features a bunch of kids talking about their parents’ jobs, while onscreen images show how Samsung devices help them to take their tasks to the next level. A father delivers cookies to the whole world, another father is a cop and fights crime, and a mother is a firefighter. Asked about her parents’ job, a young girl leaves her peers open-mouthed and speechless when she turns around her Galaxy Tab Active2 and shows them what she had drawn.

“Built for every job imaginable” an onscreen line reads at the end of the commercial, before the Galaxy XCover and Tab Active are shown.

Among the features showcased throughout the ad are Samsung Dex, Google ARCore, 10.1″ display, Mobile POS, Push-to-Talk feature, Programmable Key, and IP68 rating (which means that the device can survive 1.5m underwater for 30 minutes).

Described as “a sleek and stylish premium rugged smartphone with industrial features for best-in-class business productivity in any business circumstance,” the Galaxy XCover Pro features a built-in camera-based barcode scanner and is compatible with several laser-based scanner accessories that can turn this into a mobile point of sale system. There’s also NFC with enhanced security and reliability features, including EMV Level 1 (it stands for Europay, Mastercard and Visa). The 6.3″ 1080p+ AMOLED screen has a Glove mode and can detect touches from wet fingers. There are also two programmable keys, which can act as shortcuts for the most commonly used functions. The Samsung Galaxy Xcover Pro is now available for purchase at the brand’s website for £529.

The rugged range also includes the Galaxy Tab Active2, which is presented as “a compact, hardwearing rugged tablet featuring an 8″ display that’s ideal for business on the move,” the Galaxy Tab Active Pro, which is “a business optimized rugged tablet featuring a large 10.1″ display enabling industrial professionals to achieve best work performance,” and Galaxy XCover 4s, “a hard-working smartphone with physical keys designed to perform in tough environments”.