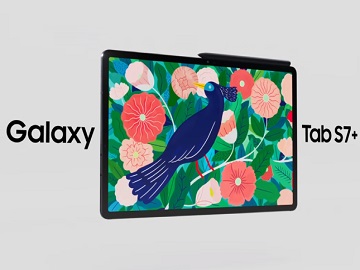 Samsung has released the official introduction film for its Galaxy Tab S7+, highlighting that this device, described as the brand’s “most versatile tablet yet,” is “designed to work hard and play even harder”.

The 90-second spot presents the new Galaxy Tab and some of its most important features, from its premium metal design and slick book cover to the super smooth 120Hz display, which makes it easier to see what’s on your screen, whether you’re scrolling fast, working on multiple things at once or meeting with multiple people, the new advanced keyboard with larger touchpad and full function keys, which makes it feel “like working on a laptop, but without the laptop,” the all-new S Pen, which responds just like a real pen thanks to its ultra-low latency, Audio Bookmark, which lets you sync audio to the notes.

The video also highlights that you can play over 100 games thanks to Xbox Game Pass Ultimate, hyper-fast 5G and the fastest processor ever in a Galaxy Tab, and that you can chill for longer with up to 14 hours of video playback thanks to an intelligent battery, and see more with an optimized screen ratio and built-in eye care display that takes care of your eyes so you can keep on watching.