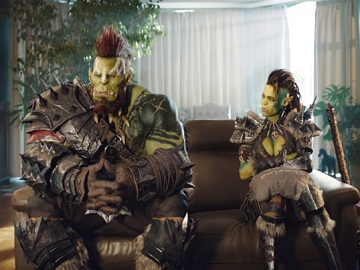 RAID: Shadow Legends is advertised in a new commercial, that features Galek and Zargala.

The spot, part of the “Couples Therapy” series, sees Galek and his partner at the couple therapist, who asks them how their week was. When Zargala encourages him to tell the therapist what he did, Galek justifies himself that it was a Dungeon run and he can’t do it solo. As it turns out he had made a team with Scyl of the Drakes, he also tries to defend himself in front of Zargala, who’s getting physically aggressive with him, saying that he’s not the one picking the teams and take it up with his player. However, despite being the target of her hitting, he has the courage to add that it had to be her because “she’s crazy good in Dungeon”. This makes things worse judging by the weapon Zargala takes out next.

The commercial ends with the couple therapist urging the lady to put down the axe and with the voiceover saying the tagline “Raid. Fight together. Together”.

With the 400+ Champions in Raid: Shadow Legends, there are hundreds of thousands of possible team combinations. Players must pick the right ones for their strategies and dominate their enemies.

The free Fantasy RPG game published by the Israeli creator Plarium Games has released several other ads in the “Couple Therapy” series, so far.