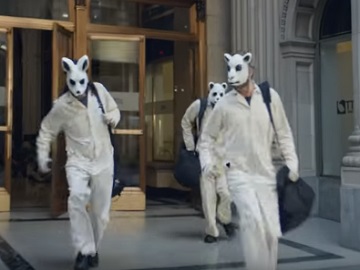 Quibi, the entertainment platform from Jeffrey Katzenberg and Meg Whitman created for mobile, made its commercial debut with a 30-second Super Bowl commercial right after the kickoff.

The spot, created by BBH L.A. and titled “Bank Heist,” features a group of bank robbers who are left with four to 10 minutes to spare by their driver, who’s in a “Pest Control” van watching something on Quibi. “I’ll be there in a Quibi, less than ten minutes,” he tells his fellows, who are desperate to get out of there as soon as possible. Well, not all of them, actually. A third one takes the opportunity to watch something, too.

“Episodes in ten minutes or less. Quick bites. Big Stories” onscreen linea read at the end of the commercial.

Quibi, whose name comes from “quick bites,” is designed to be viewed on mobile devices with content that can be consumed in 10 minutes or less and is set to debut April 6.