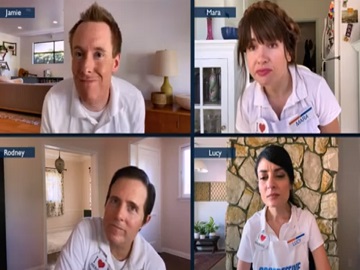 Progressive continues its Work From Home video series with a new installment, that features the six Progressive employees proving they have also lost track of time.

The spot opens with Flo saying “And that’s how we bundle and save” and asking “TGIF everybody, right?”. When Jamie tells her it’s actually Tuesday, Mara intervenes to say that she doesn’t really do days, but just months. Lucy says she has a journal that tells her what day of the week it is but she lost it on Tuesday. When Flo declares she knows how to tell what day it is and says it’s Jamie’s birthday, Mara doesn’t understand how this helps them, but Jamie clears up that he was born on a Tuesday. Eventually, Alan, who can’t stand this anymore, asks everybody to look in the right-hand corner of their computer, where it says Thursday. “It says it because it’s Thursday,” Alan points out, which makes Flo exclaim “See? I was right! TGIF. Thursday gets it funky.” However, Jamie can’t help mention that his says Viernes.


The commercial ends with the onscreen line “One thing’s for sure: it’s a great day to bundle and save.”