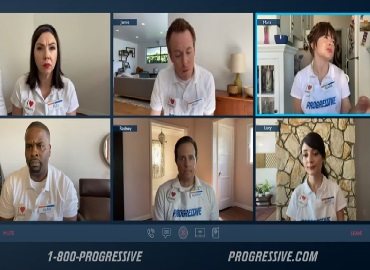 Progressive has brought Mara back in its latest commercial, to show that there’s no need to fear the mute button if you always tell the truth.

The spot, dubbed “Mara Unmuted,” features the Progressive team working from home and having a video conference. On the split-screen, viewers can see not only Flo and Jamie, but also Mara, Alan, and other two colleagues – Rodney and Lucy.

While everyone is getting ready to resume after a short break, apparently, Mara is shown talking to someone near her, saying she’s done after that meeting. “We’re just going over how people who switch to Progressive can save hundreds,” she also mentions looking into another direction. When Alan tries to get her attention, Mara keeps talking, saying that Jamie is the one running the meeting and revealing that she once “had the fake jury duty to get out talking about his yogurt preferences.” At this point, Flo intervenes, asking Mara is she knows she’s not on mute. “Oh, there’s a mute button?” Mara asks a little bit surprised, but then she turns back to her interlocutor, explaining that the woman who had just finished talking is Flo, “the one who looks like she’d smile while she sleeps”.

“Secret’s out. You can save when you switch” an onscreen line reads at the end of the commercial, while in the background Flo is heard saying she always smiles and Mara answering that this is the reason she said what she had said.

Jamie, played by Jim Cashman, was enlisted to join her in 2017. In one of the spots he starred in, dubbed “Jamie’s Twin”, he even had a doppelganger, played by British actor Jack Turner.

Mara, played by Natalie Palamides, was introduced earlier this year, in a commercial dubbed “Off the Mara-ket,” which featured the new Progressive team member making all her male suitors back away.