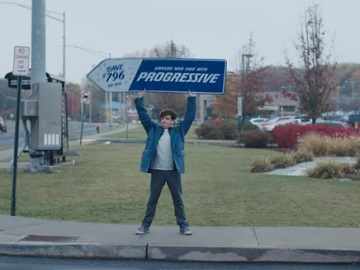 Progressive has released a new commercial, featuring a sign stopper.

The 30-second spot features a young man on a sidewalk, spinning a sign that reads “Drivers who save with Progressive save $796 on avg”. Approached by a driver with the kind request to tell her how to get to the highway, he refuses, saying he’s working. The lady insists by asking him to use his sign to point her in the direction, but he refuses also this time. “I wish I could, but it’s not that kind of sign,” he explains, holding the sign over his head, without moving it and making the driver realize that she won’t get any help from him.

“Switch to Progressive and you can save hundreds. You know, like the sign says,” the voiceover declares at the end of the commercial.

Progressive is not the first insurance company to spin the “Switch to us to save money” sign. The General highlighted in a 2017 commercial starring Brett Holland, that you can receive immediate proof of insurance for a low rate with The General and never worry about sign spinners on the street again.