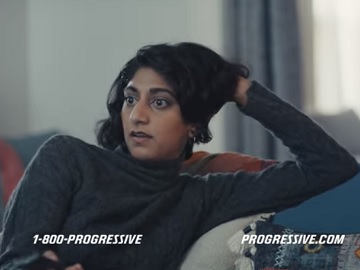 Progressive continues its Sign Spinner campaign with a new installment.

The spot features the Sign Spinner guy sitting on the couch together with his partner (played by American actress of Indian origin Sunita Mani) and asking her if she noticed that his forearms look bigger. She says they look the same while actually ignoring his forearms, focused on the TV program. He then says that he’s been spinning faster recently and he thinks they’re getting bigger. Willing to get a confirmation from her, he asks her to feel them, which makes her agree with him. He then grabs the Progressive sign, which informs that drivers who save with Progressive save over $750 on average.

“Switch to Progressive and you could save hundreds. You know, like the sign says,” the voiceover says at the end of the commercial.

Sunita Mani is the latest to join Progressive’s roster of actors starring in its advertising campaigns. The company’s famous spokesman, Flo, created by agency Arnold Worldwide and by actress/comedian Stephanie Courtney since 2008, was gradually joined by Jamie (Jim Cashman) and Mara (Natalie Palamides), who was introduced earlier this year, in a commercial dubbed “Off the Mara-ket,” which featured the new Progressive team member making all her male suitors back away.