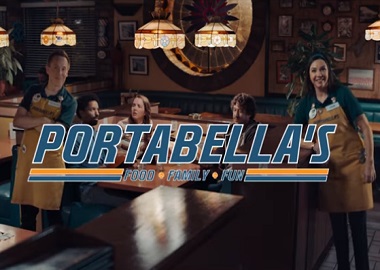 Flo and Jamie are back to the small screen in a new commercial. This time, though, they put on different aprons.

Set in a restaurant, the spot opens with Jamie as a waiter (named Robbie) greeting a group of guests at a table by saying “Welcome to Portabella’s!” and adding, of one of the guys at the table, that he “looks like he’s ready for some scampi bites”. When the woman says she feels like she knows him, Jamie asks the three friends if they dined at Portabella’s before. The other man realizes he’s “the pasty insurance guy,” but Jamie doesn’t admit it. He laughs instead, answering “Like I’m gonna go into some spiel about how you can get options based on your budget with the Name Your Price tool”.

At this point, Flo, also dressed as a waitress (named Pam), shows up and asks “Robbie” if he told the guests about the mushroom puffers. The latter replies he was about to and in the meantime the guests realize they are in a Progressive commercial.

The spot ends with a sung tagline, “Come down to Portabella’s! It’s food, family and fun!”.

Flo, created by agency Arnold Worldwide, is played by actress/comedian Stephanie Courtney, who took over this role for TV in 2008. Courtney also portrayed other members of Flo’s family, including her sister, Janice, her brother, Todd, as well as her parents and grandfather.

In 2011, Progressive introduced an Australian counterpart to Flo, named Kitty, played by Australian actress Holly Austin. In 2017, the insurance company tapped actor Jim Cashman to play Jamie, Flo’s co-worker. In one of the spots, dubbed “Jamie’s Twin”, he even had a doppelganger, played by British actor Jack Turner.