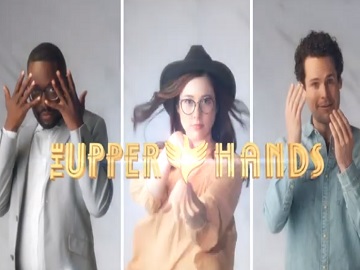 Progressive advertises its Home Quote Explorer, which allows you to compare home insurance quotes in the palm of your hand, in a new commercial.

The spot, titled “The Upper Hands,” features Flo as a special guest on “The Upper Hands” show, who challenges the hand models to show off the ease of comparing rates with Progressive’s Home Quote Explorer. Viewers are given a glimpse at the way the contestants “performed” and at the jury’s reaction. It seems the international hand model Jon-Jon gets personal, there is a high stakes patty-cake battle royale, and more. “It’s a race to the lowest race and so much more, only on The Upper Hands,” the voiceover announces.

Progressive is known for advertising its home and auto insurance bundle, which lets customers get a discount. The company also offers multi-policy discounts for bundling RV, boat, motorcycle, and more.

Earlier this year, the insurance company introduced Mara (Natalie Palamides) as one of Flo and Jamie’s colleagues, who makes all her male suitors back away. Sunita Mani, one of the latest to join Progressive’s roster of actors, was featured in a commercial as the sign spinner’s girlfriend.