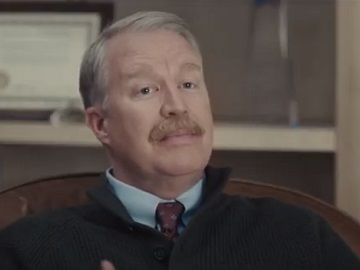 Parenta-Life Coach Dr. Rick helps a group of young homeowners deal with the very real struggle of not turning into their parents in the latest Progressive commercial.

The spot features Dr. Rick, whose job is to help new homeowners who have turned into their parents, visiting a store called House World together with a group of new homeowners (because this is one of the ways he helps them – by getting them out of the home). This outing proves to be quite challenging for Dr. Rick, who sees his “clients” doing all kinds of things. One of the women, for instance, talks to someone over the phone and shares her plans for lunch and dinner, but with the phone on speaker. One of the men tries to offer unwanted help at the Tile Tools and another one in the parking lot, giving instructions to a driver going in reverse. Another scene took place when a blue-haired teenager showed up and the guys could’t help from saying out loud that his hair is blue.

In a previous spot, Dr. Rick helped another group of young homeowners on their journey to not turn into their parents by answering these very real and pressing questions: How many pillows are too many? When does helping become hindering? Who reads books about Submarines?

This new campaign can be considered a continuation of the “Parentamorphosis” campaign, which was created by Arnold Worldwide in 2016 and became Progressive’s most successful effort without spokeswoman Flo. This campaign included several spots directed by Roman Coppola, featuring homebuyers that assume the most annoying traits of their parents. One of the commercials featured several men and women talking in a “Dad” Support Group about their transformation frustrations. Another spot featured a married couple sharing their story about how the husband, Matt, changed when they became homeowners. If, when they were dating, they used to get excited about things like concert tickets or a new snowboard, all that changed when they bought a house. “Matt started turning into his dad,” says the woman. Another ad featured a group of friends on a road trip, where they realize that one of them, named Keith, who “used to be great to roadtrip with,” has changed dramatically since he bought his house.