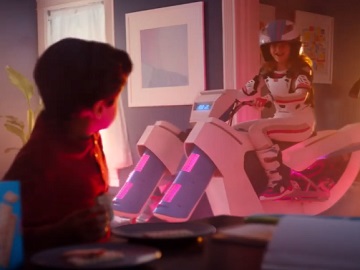 The 15-second spot features two siblings enjoying the new Pop-Tarts Crisps variety. When the boy realizes that these have frosting and delicious filling, declares that it’s “the best thing ever”. As he’s ready to finish eating, his sister shows up from the future, riding a hoverbike, and asking him if he wants to join her. Learning that she doesn’t have Pop-Parts Crisps, he decides to decline the invitation because his sweet treat is better.

Pop-Tarts Crisps Frosted Strawberrylicious, described as “a delightfully crispy take on the classic Pop-Tarts Toaster Pastries,” are made with a light, crisp layer of Pop-Tarts pastry made with whole grains, filled with yummy Strawberry filling, then topped with the sweet delicious icing you love. They are available for purchase on Amazon, as well as at various retailers, including Target, Walmart, and more.