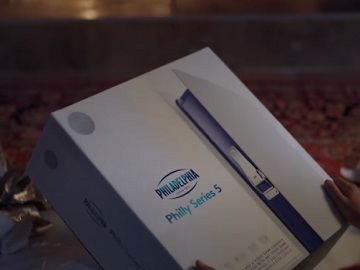 Philadelphia Cream Cheese announces, in its latest commercial, a parody for the PS5 console, that “The Philly Series 5 is here to change the cheesecake game forever”.

“It’s the hottest gift of the holiday season. With 3D cookie crumb technology, the latest dual egg processor, and five bricks of power,” the voiceover says in the opening of the 50-second ad, introducing the Philly Series 5, while on the screen a diverse cast of people, including children, are shown receiving the Philly Series 5 as a Christmas gift, which they open with delight.

The voiceover continues his speech saying that, “now, everyone can experience next-generation joy” and urging viewers to get the Philly Series 5 for just $4.99 at phillyseries5.com.

The ad also features a kid who declares, after tasting a cheesecake made together with his brother, that it “tastes like 4K resolution”.

The Philly Series 5, which is a cheesecake kit that comes in a box that resembles a gaming console, includes five packs of Philadelphia cream cheese original (featuring five simple ingredients and no preservatives).

Bud Light released a gaming console of its own, too. Named the BL6, the “device” takes the shape of a 6-pack of beer and has 16 gigabytes of memory and an ASUS projector, and can also keep two cans of beer cold.