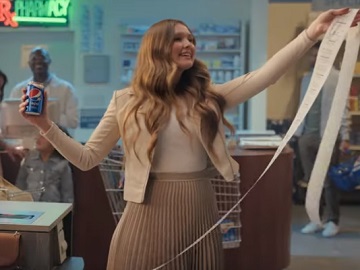 Pepsi advertises the vanilla-flavored Pepsi in a new commercial, that encourages people to dance like everyone is watching.

The spot features a young woman doing a ribbon dance without the stick, while holding a Vanilla-flavored Pepsi can, to the rhythms of The Weeknd’s 2019 single “Blinding Lights”. As the ad goes on, it turns out she was actually in a grocery store doing the dance moves with the receipt at the cash register. Eventually, she starts dancing again, despite the witnesses, who have silently praised her enthusiasm judging by their reactions.

The commercial ends with the Vanilla-flavored Pepsi cans and the tagline “PEPSI That’s What I Like” flashing across the screen.

The zero-calorie variant of the carbonated drink is also available in Vanilla flavor.

This April, the brand launches nationwide also Pepsi-Cafe, which comes in two 12oz can flavors – Original and Vanilla.