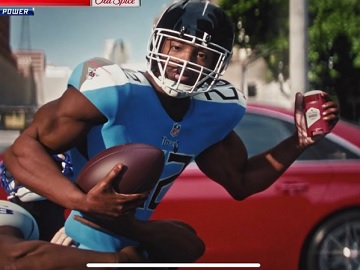 The spot features the Titans running back running through a busy street, a playground and an airport with two opponents holding him, to prove that he cannot be stopped. “When I break a long run, I’m talking a long run, that’s why I use Triple Protection Old Spice Sweat Defense. It’s not just strong. It’s strong strong. It works harder for longer. So when it’s time to eat, I’m going to eat eat,” he says while doing his run. When one of the two guys grabbing him asks him if he’s going to be much longer, he answers – while running on a treadmill and reading a book, that “it’s going to be a minute minute”.

At the end of the ad, the tagline “Smell Ready for Anything” flashes across the screen.

Henry was named new Old Spice Guy on Tuesday, October 27, joining thus Isaiah Mustafa (known as Old Spice guy). The brand has enlisted several other celebrities over the years to star in its ad campaigns, including Kevin Hart, William Harper, Reggie Couz, Montez Sweat, Von Miller (who has been tapped as the new Old Spice guy for the brand’s 2016-17 NFL campaign), and more.