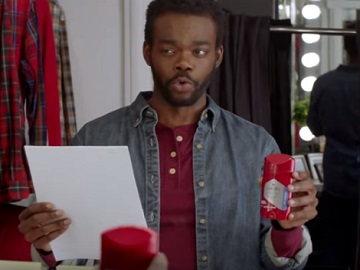 Old Spice has released a series of new commercials, one of them featuring William Jackson Harper.

The spot features Harper in a trailer, reading a script for an Old Spice ad, when the Old Spice guy, played by Isaiah Mustafa, shows up, bare-chested and with a towel covering his legs. Asked for a piece of advice, the latter says “it’s important to use your charm to command the good smelling smells of Old Spice Ultra Smooth to transport your audience to a place where the sun is in perpetual sunset over yet to be discovered paradise”. “Anything else?” Harper asks and soon learns that ice sculpting helps.

“Smell like your own man, man.” an onscreen line reads at the end of the commercial.