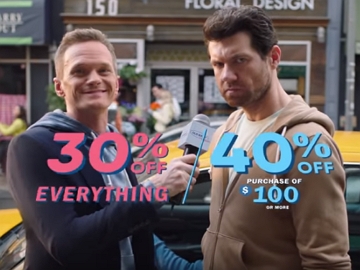 Neil Patrick Harris and Billy Eichner share the screen in a new ad for Old Navy, that promotes the retailer’s offer.

The spot opens with the How I Met Your Mother star hosting the “Fleece Edition” of the Old Navy Tonight show and then out in the streets for a survey to find out what’s better than fleece. He asks several passersby wearing Old Navy fleece sweaters if certain things, such as freckles, crackles, and more, are better than fleece, but the answer is always “No”.

Eventually, he catches Billy before he gets into a taxi and asks him if Wizards is better. The creator and executive producer of the comedy game show Billy on the Street reproaches Neil that he stole his show and declares that nothing’s better than fleece.

The commercial ends with the voiceover urging viewers to get 30% off everything or 40% off their purchase when they spend $100 or more.

This is not the first time Neil Patrick Harris stars in a commercial for Old Navy. Last year, he starred as Oprah in the retailer’s holiday push. Old Navy has also worked with several other celebrities, including Kristen Bell, Regina Hall and Busy Philipps.