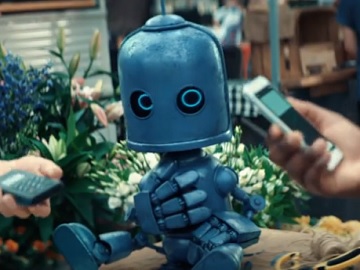 The spot, created by agency VCCP and directed by Gary Freedman through Independent Films, introduces a new character called “Bubl” – a little blue robot that helps different people throughout the day by doing various things for them. For instance, he keeps a young woman entertained as she’s waiting for her date on a bench, he provides directions to a scooter driver, and helps out a florist at the market.

The soundtrack music is a special cover of The Wannadies’ “You & Me Song”, performed by Joy Crookes and released last month.

“We wanted to create a connection on an emotional level, to give an empathetic feel while communicating our message,” Nina Bibby, O2’s chief marketing officer said in a press statement, adding that this is how the cute blue robot was brought to life. “So we created Bubl as that reliable, engaging character and used him to bring to life many of the ways our network is there for customers,” she explained.

O2, also known for its exclusive platform O2 Priority, which allows its customers to get early access tickets and take advantage of a wide range of offers for free events and food, has found an alternative during lockdown: it has been offering free online exercise classes and streaming subscription discounts with Disney+ and MTV. In addition, it partnered with Uber Eats to offer those using Priority £10 off their order.