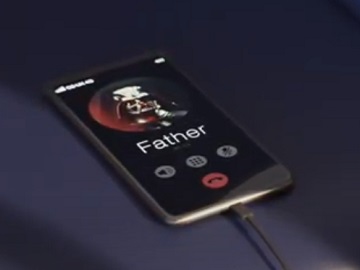 O2, which became the exclusive UK mobile network distributor for Disney+ (the highly anticipated streaming service from The Walt Disney Company), has released a new advert to promote its latest deal, which includes six months of Disney+ on them for new and upgrading pay monthly customers.

The Star Wars-themed spot features a smartphone, in which the owner’s father has Darth Vader as image and The Imperial March – Darth Vader’s Theme (from “Star Wars: The Empire Strikes Back”) performed by The City of Prague Philarmonic Orchestra, as a ringtone. Asked by his son how’s the Empire, the dad makes a joke.

The voiceover says that now you can get six months of Disney+ on O2 and urges viewers to search O2 Disney+.

According to a press release, subscribers can enjoy the Disney+ experience, which includes over 500 films, more than 350 series and a slate of 26 exclusive Disney+ Originals at launch, and unparalleled content from Disney’s iconic entertainment brands, such as Disney, Pixar, Marvel, Star Wars, and National Geographic, across mobile and connected TV devices, including gaming consoles, streaming media players, and smart TVs. With Disney+, customers can create up to seven different user profiles, with unlimited downloads on up to 10 devices. Subscribers are also able to enjoy commercial-free viewing and stream across four screens simultaneously with a wide selection of 4K Ultra HD and HDR titles. Furthermore, the service also provides parental control functionality in the form of Kids Profiles that enable a child-friendly way to access age-appropriate content.

Using the My O2 platform customers on eligible tariffs can choose from a range of extras covering areas such as music, video, meditation, books, and audiobooks. For more information, you are advised to visit the O2 website.