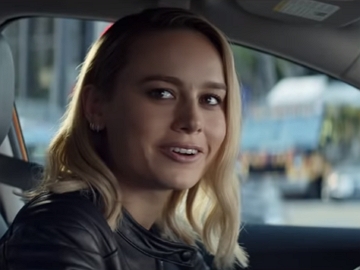 Nissan has tapped Brie Larson to star in its new commercial for the radically redesigned All-New 2020 Nissan Sentra, which aims to encourage people to aim higher and never settle for less.

The spot, part of the automaker’s “Refuse to Compromise” campaign, which launched March 6 on Twitter and will debut on TV on March 11, opens with a woman being informed by her boss that he’s gonna hold on promoting her. At this point, Brie shows up at the wheel of a Monarch Orange Metallic 2020 Nissan Sentra SR, asks her to drop the taco and get in the car, where she raises a few questions that inspire her to not compromise her career plans. “Does this Sentra feel like a compromise to you?” the Academy-Award winning actress asks the passenger, who doesn’t understand what happens at first. “The handling, it’s good, right? No compromise there,” Larson points out, showcasing then how the Rear Automatic Braking system works. “So if this Nissan Sentra isn’t going to compromise, why should you?” she also asks before dropping her in the same place from where she picked her up. “You’re right!” the woman answers, heading toward her boss with a determined pace.

The commercial ends with the voiceover declaring that the all-new Nissan Sentra, starting at $19.090, “has more standard safety features than any other car in its class”.

Larson said “It’s great to partner with Nissan on this inspiring campaign which is essentially about advocating for yourself and believing that you deserve a seat at the table.” She also added that “It’s a powerful message in a bottle” that she’s “so proud to be a part of”.

The 2020 Sentra lineup includes the S, SV and SR and is now on sale at Nissan dealers nationwide.