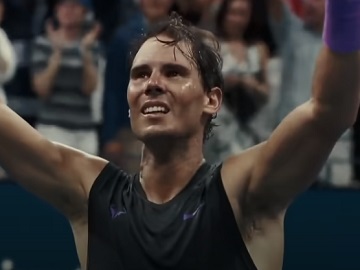 Nike strives to bring innovation and inspiration to every single person in the world in its latest commercial, which shines a light on comeback stories of various athletes over the decades, including Serena Williams, LeBron James and Tiger Woods.

“We’ve all been underestimated and counted out. In those moments we felt like it was over. But it’s when we were given no chance that we somehow found that last bit of strength to keep fighting. And then we did what no one thought we could. Not even ourselves. We came back from the impossible. From being broken. We found a way when it seemed hopeless. We came back when we should have been long forgotten. And we did it time and time again. Right now, we’re fighting for something much bigger than a win or a championship. But if we learned anything from sports is that no matter how far down we may be we are never too far down to come back,” the voiceover says on the 90-second spot, which includes footage of various matches across different sports, from tennis to bascketball to golf to football and more.

The commercial, which is narrated by LeBron James and extends the brand’s “You Can’t Stop Us” campaign, will air during Tiger Woods’ return to the golf course.