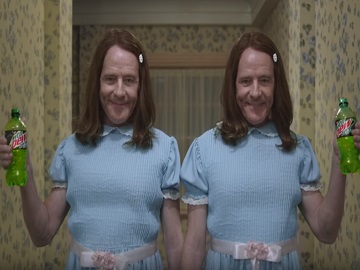 The spot is a re-imagination of the famous “Here’s Johnny” scene from the classic horror film “The Shining” and features Cranston as Jack Torrance and Tracee Ellis Ross as his wife, Wendy Torrance. The latter, locked in the bathroom, is served by her husband with a bottle of MTN DEW Zero Sugar through the door, which is cracked with an axe. “Here’s MTD DEW Zero,” Cranston tells his wife, who stops screaming and says she’s thirsty while grabbing the bottle.

“As good as the original, maybe even better?” an onscreen line reads at the end of the commercial.

On Super Bowl Sunday, the brand launched an augmented reality Snapchat filter allowing fans to superimpose themselves into another scene from The Shining, the twins scene, in the DEW commercial.

MTN DEW announced they will make a charitable contribution, matched by Bryan Cranston, to FilmAid, a 501C3 organization that harnesses the power of film to inform, educate and inspire vulnerable communities around the world.