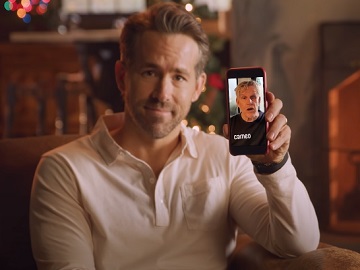 A new commercial for budget wireless carrier Mint Mobile has been posted by Ryan Reynolds on his social media accounts. The ad features not only the actor, but also a cameo from Gary Busey.

The Deadpool star opens the video by saying that, “Every holiday, wireless companies spend billions on promo commercials,” but at Mint, they find “innovative ways to do things. Like partnering with Cameo.” He then pulls up a Cameo on his phone from Gary Busey, who says that “this Cameo is for America from a little girl named Mint Mobile”.

After introducing himself, he mentions that on Mint Mobile (which “is a good name like Mobile, Alabama,” according to him), “you can get three months of free service with any plan. Even unlimited.” Mentioning that this is “a great promotion,” he remembers the day he got promoted. “I got promoted once, and that was a good day,” he declares.

“Yup. That’s Gary Busey. Legend.” Reynolds says at the end of the commercial.

Mint Mobile was created in 2016 and became one of Reynolds’ “properties” after he purchased, in November 2019, an ownership stake in it. The Hollywood actor is also known for promoting Aviation Gin and dating app Match, which he also owns, as well as the SickKids Foundation. Earlier this year, he promoted this charity through a special video, featuring an ugly sweater, and helped it earn money by taking his feud with Hugh Jackman to Sam’s Club.

Purchases of Reynolds’ Aviation Gin or Jackman’s Laughing Man Coffee at Sam’s Club locations through December 20th counted as a “vote” for Team Ryan or Team Hugh. Regardless of the winner, Sam’s Club pledged to donate equal amounts to both the Laughing Man Foundation and the SickKids Foundation after the contest ends.