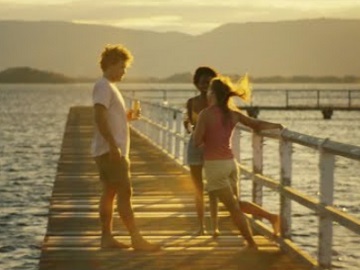 The 15-second spot features a group of friends enjoying a bottle of Michelob ULTRA Pure Gold by the lake. while in the background slow jazz music plays, the voiceover says “When the sun warms your back after a cool summer swim, at the lake you found and the day pretends like it’s not gonna end, that’s pure gold”.

Michelob introduced its ULTRA Pure Gold, a USDA Certified Organic Light Lager with 2.5 carbs and 85 calories, in its second commercial for this year’s Super Bowl, which starred Zoë Kravitz. The ad, created by agency FCB Chicago and directed by Emma Westenberg, featured the actress against a stunning landscape, whispering a message about the Michelob ULTRA Pure Gold in the hopes to trigger ASMR (autonomous sensory meridian response) for viewers.

The brand has also enlisted global superstar Maluma to star in its first commercial for the Big Game, which presented the Michelob ULTRA as “a superior light beer that goes with our rhythm”. In the past, Michelob has also worked with Chris Pratt and Olympic bronze medalist Kerri Walsh Jenning, who promoted the Michelob ULTRA Infusions Lime & Prickly Pear Cactus.

Previous: Progressive Motaur at the Gym, on Treadmill Commercial
Next: HECK Sausages TV Advert: Make This Summer Happy as Heck!