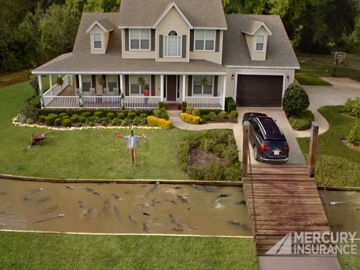 Mercury has released a new commercial to advertise its services.

The spot, titled “Moat,” features a man who built a moat and filled it with alligators to protect his home and auto. However, as he feeds the hungry reptiles, he realizes – just like his wife says – that they should have switched to Mercury. “They’ve got great coverage and bundling our home and auto policy is gonna save us hundreds,” the woman says before an alligator gets out of the moat and head toward her husband, who concludes that “that would have been smarter”.

The commercial ends with the company’s tagline, “The Smarter Way to Save,” flashing across the screen.

The company’s Cheapskates campaign features various other bizarre ways to save money, such as using a bowl to cut the kid’s hair, using the neighbor’s sprinklers for showering, sharing your clothes with your significant other, relying on free samples to fill your dinner plate, sharing one set of batteries, offering the same gift on couple anniversary, and more.