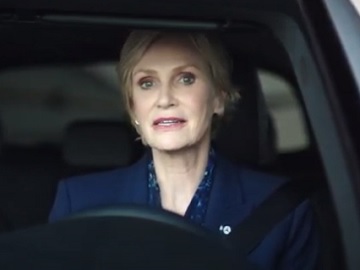 Mercedes-Benz has released a hilarious In-Drive Safety Video starring Jane Lynch, who was appointed as brand ambassador for the GLC.

The 60-year-old actress, known for her role as Sue Sylvester, the ruthless coach of a high-school cheerleading squad on the hit TV series Glee, declares, in the opening of the video, that people really miss flights right now, so much so they’re even missing in-flight safety videos and, luckily, GLC is your first-class ticket to travel this year. She then starts to give some instructions to be followed before and during the ride, urging people to make sure all items are properly stowed in the cargo area, which has plenty of room for your luggage and your tote bag full of priceless heirlooms. She shows how to fasten the seat belt, saying that, “if you don’t know how to do this, you probably shouldn’t be driving a car,” where the exits can be found, and highlights the dual zone climate control and the adjustable front seats with heated cushions. The Glee star also explains what you should do in case you need oxygen and what you can do by connecting your phone to MercedesMeConnect, mentioning that it can turn your can on and off.

Toward the end of the video, the actress reminds everyone that, once you take off, the use of electronic devices is not allowed, and urges drivers to check out “that in-drive infotainment system”.