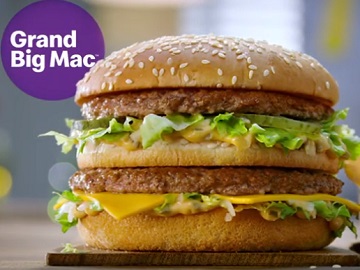 McDonald’s UK advertises the return of its Grand Big Mac in a new TV spot, highlighting that, for the first time, customers can also get Big Mac’s special sauce.

The 30-second ad features a diverse cast who are apparently suffering after a breakup, given the soundtrack – Roxette’s 1987 hit single “It Must Have Been Love”. A woman sitting by herself on a bench, in the park, another woman walking down the sidewalk her eyes almost in tears, a couple in a car who seem to have had a though discussion are only some of the characters that lead viewers to believe they are in pain because of a dramatic event in their lives. However, as the spot ends, it turns out they are all sad because they have just finished a Grand Big Mac.

“Good news. The Grand Big Mac is back,” the voiceover says at the end of the advert, informing that, for the first time, there will also be Big Mac’s Special Sauce Parts.

The Grand Big Mac, made with two huge 100% beef patties, a slice of cheese, lettuce, onion and pickles and Big Mac sauce in a sesame topped bun, will be served after 11am, until 24th of March, in participating restaurants.