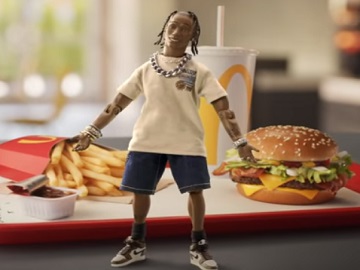 McDonald’s promotes, in its latest ad, the Travis Scott Meal, also known as The Cactus Jack deal, which consists of Travis’ three McDonald’s favorites, all for only $6.

The spot features an animated figurine of the hip-hop artist presenting his meal, including a Quarter Pounder with Cheese stacked with bacon and lettuce, medium crispy Fries with tangy BBQ sauce, and a Sprite.

“We’re excited to bring the Travis Scott Meal to a McDonald’s near you,” said McDonald’s US chief marketing officer Morgan Flatley of the promotional meal, which is now available at participating locations nationwide through October 4.

Consumers can order in-restaurant, for carryout, at the drive-thru or through the McDonald’s app.

The fast-food restaurant chain announced that there’s more to come from them and Travis Scott and urges you to stay in the loop by signing up for emails.