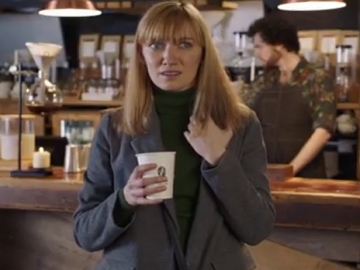 McDonald’s UK promotes the McCafe’s “great tasting coffee” in a new advert, that takes a jab at the fancy coffee shops that have huge prices just because they are offering something else besides coffee.

The 30-second ad, titled “Ball Pit,” features a woman as she enters a coffee shop and asks for a latte. Busy to talk to someone on the phone, she doesn’t pay too much attention to what happens around her, in the coffee shop, where a man is getting a massage while drinking his coffee, a DJ is playing music, a man and a woman are having their coffee in swinging chairs, and another man is holding his cup of coffee in a wooden pool filled with colorful balls where no children are allowed, but only adults, who are getting in there by sliding on a slide, apparently. The woman pays contactless with her card, but immediately after that she realizes the ridiculous amount she had paid for that cup of latte and starts wondering why so much.

“Do you ever feel like paying for more than just a coffee?” the voiceover asks at the end of the advert, adding the tagline “McCafe, great tasting coffee, simple”.

The soundtrack music is “Worth It” by Fifth Harmony feat. Kid Ink.