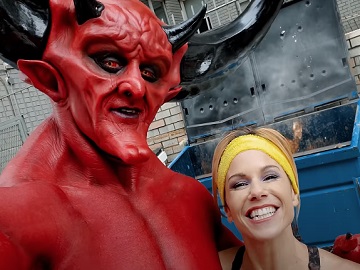 The spot features Satan finding a match with a woman named “2020”, 11 months ago. The two, who meet through the Match app, fall for each other and become inseparable after their first date. Throughout the video, they are shown having a picnic in an empty stadium, working out in an empty gym, watching a movie in an empty movie theater, stealing toilet paper from a bathroom, and taking selfies by the dumpster fire.

At the end of the commercial, while the two lovers are sitting on a bench, at sunset, looking at a bridge, Satan utters romantically “I just don’t want this year to end”. 2020, who’s holding her head lightly on his shoulder, asks in response “Who would?”.