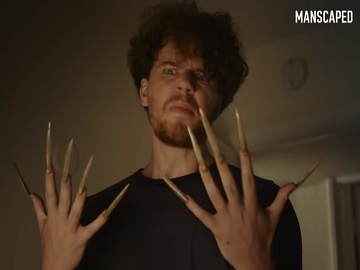 Manscaped advertises its Shears 2.0, which is a luxury 4-piece nail kit, featuring tempered stainless steel tools within a compact case made of premium PU leather, in a new ad.

The commercial opens with a horror-inspired scene, which sees a man with very long nails entering a room, while in the background suspenseful music plays. Immediately, though, the light is turned on and a woman asks the man, who it turns out is her husband, when is the last time he clipped his fingernails. After he admits that it’s been a while, she shows him the-piece nail kit she had bought for him. “It’s the Shears 2.0 from Manscaped. It has clippers, tweezers, scissors, and a file so you can stop looking like you’re straight out of a horror movie,” she tells him.

In his attempt to grab the nail kit, after thanking her for the gift, the man hurts her, with no intention, though, making her shout in pain.

At the end of the commercial, the voiceover urges viewers to visit the brand’s website and order the Shears 2.0, highlighting that, for a limited time, shipping is free with online orders.