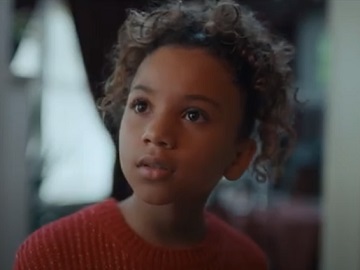 Macy’s has released its Christmas commercial, telling the heartwarming story of a little girl who “takes an unexpected journey in finding the perfect Christmas gift for her dad”.

The spot, created by from BBDO New York and titled “In Dad’s Shoes,” features a girl trying to decide what to get her dad for Christmas and, after she decides to try on his shoes for size, finds herself turning into her dad, named Dave. Well, not physically, but everyone around her – from neighbors to various other members of their community – greet Dave when they see her wearing the man’s shoes. So, after literally walking in her dad’s shoes across the town to run errands and do various other things for the family, the kid – who gets home tired after a long day – learns that her father “spends a lot of time on his feet”. She thus decides to offer him a soft pair of socks as a Christmas gift, impressing her dad.

“Give. Love. Believe” onscreen lines read at the end of the ad.

The commercial, which was inspired, according to a BBDO representative, “by the idea that giving a thoughtful gift means really getting to know someone and that you can’t truly understand someone until you’ve walked a mile in their shoes,” debuted on Sunday, November 8 and runs on TV and online.