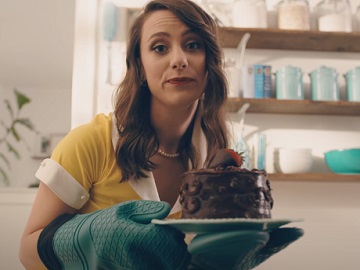 Litter Robot is promoted in a hilarious commercial, featuring actress and model Callie Bussell as the brand’s spokeswoman.

The spot features Callie highlighting that the smell of cat shit is all over the place in a cat owner’s house, from the couch, to the pillows, and even the counters. “Each time your feline friend drops a mountain of fecal matter in the litter box, their paws become the perfect vehicle to transport that dirty litter directly to your favorite blanket. If you’re still scooping one of those traditional dirty litter boxes, where your cat has to step on poop to go poop, well, that’s like you being forced to use that unbearably disgusting truckstop restroom off the exit 129,” the woman says, adding that our cats aren’t the problem, because they didn’t have a choice and neither did you. She then adds that now you do have a choice and introduces the Litter-Robot, “the highest-rated self-cleaning automatic litter box in the world”. The spokeswoman declares that this device “does all the dirty work for you” by automatically cycling after each use sifting out those dirty clumps and leaving a fresh bed of litter every time kitty needs to shift”.

The woman urges cat owners to not be scoopers and order the Litter-Robot, mentioning that they’ll get free shipping and a 90-day money-back guarantee.