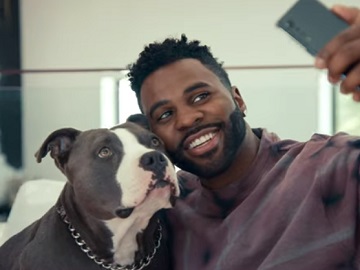 LG has enlisted Jason Derulo to be the face of its campaign for the LG Velvet 5G smartphone.

The singer and content creator stars in a 2 minute and half video for the brand’s new device, touting some of its most important features, including the available color variants (Aurora Gray, Aurora Silver, Aurora Red, and Pink White), which he chooses based on his outfit for the day, the 3D Arc Design and raindrop-inspired rear camera array, the curved 6.8-inch OLED Cinematic FullVision display and 20.5:9 aspect ratio, whill allow him to be fully immersed in his mobile viewing experience, the impressive audio with stereo speakers and the LG 3D Sound Engine, the 48MP main camera, the lightning-fast speeds and power efficiency, the long-lasting battery, and more.

LG Velvet, which launched earlier this year in a few regions around the globe, was released in the US on July 22nd, for $599. It is now available for purchase exclusively at AT&T but, later on this summer, it will also debut at Verizon Wireless and T-Mobile.

“With LG VELVET 5G, we set out to create a smartphone with unique personality and design language that would speak to consumers, while also evolving the LG Mobile brand,” said Chris Yie, head of LG Mobile, North America. “We believe we have achieved these goals with LG VELVET 5G, designing a beautiful, powerful and premium smartphone at a price point that delivers exceptional value.” Peggy Ang, head of marketing, LG Electronics USA, said in a press statement.

Derulo won’t be the sole endorser of this smartphone, according to the brand, which revealed that more endorsements are to come.